24 hour care for pets in need: Rocky and Emma 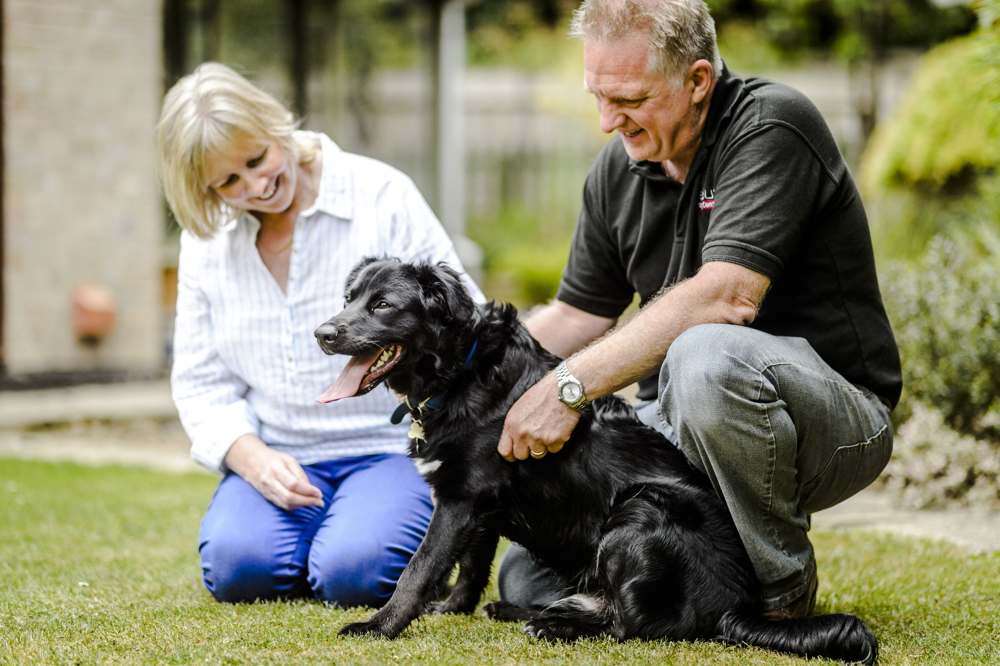 Blue Cross gives round-the-clock care to pets in the most dire of need.

The charity loves to care for pets that are suffering from illness or injury and are in the most need. They tell us the stories of puppy Rocky and kitten Eddie.

He wasn’t a Labrador, and he wasn’t healthy. Rocky, then just eight weeks old, had been bought from a classified advertising website and within hours of arriving home with his new family he was at death’s door.

After getting no response from the sellers they had collected him from and unable to afford private vet fees, his worried owners brought the sick pup to the Blue Cross animal hospital in Victoria, central London.

He was suffering from an illness called parvovirus – a highly infectious but entirely preventable disease that can kill puppies fast. It’s very contagious in unvaccinated litters, especially where hygiene is so poor. Sadly, Rocky’s siblings are likely to have suffered a similar fate.

Caught totally unprepared for such a sick pet, Rocky’s owners made the heartbreaking decision to part with him and asked that Blue Cross find him a new home should he recover.

Flat, floppy and very ill, Rocky needed intervention fast if he was to make it, so the team placed him in isolation and gave him round-the-clock emergency care.

Hannah Dennis, Veterinary Nurse, was one of a team who made sure he found the strength to survive.

She said: “Rocky needed encouragement to eat. We fed him by hand every two hours, little and often, to build up strength without giving him too much and making him sick.”

It was touch and go for a while, but gradually, Rocky began to take some tiny mouthfuls of food. That, and the fact the cheeky pup kept trying to chew through his drip, were sure signs that he had got to Blue Cross in the nick of time and was on the road to recovery.

And so, after nine days in intensive care, Rocky left the hospital and travelled to our Hertfordshire rehoming centre, which the charity is currently appealing for funds to rebuild. 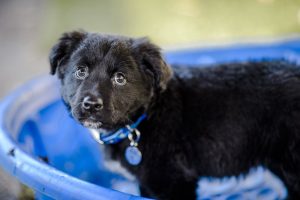 It was there that he started the training and vital socialisation he had missed out on when he was ill. But it wasn’t long before he found a new home with Tracy Meadows and her family.

Due to his troubled start to life, the family had to work hard to ensure Rocky became a well-rounded pet, which included getting him used to the sights and sounds that any normal puppy brought up in the right environment would have been.

“He was terrified of everything in the kitchen, because he wasn’t brought up in a home environment and probably lived in a shed or something. We had a list of things to help him with and ticked them off. One week we’d focus on saucepans, next week it’d be the kettle,” explained Tracy.

Rocky is now a happy, much-loved pet with a love for the outdoors and swimming. He has brought his family together through their many walks and visits to new places; and the young dog has even inspired his young owner, Tom, to pursue a career in animal welfare.

The 15-year-old said: “Rocky simply means the world to me now, he has changed me for the better. He just seems to brighten up the day for me. I think digging deeper, the bond I have with him is unbreakable. It’s like he understands me and can cheer me up no matter what.

“Rocky gives me hope; the thought of what he has been through drives me to pursue my dream of becoming a vet. Now I have Rocky with me I can overcome anything.”

Thank goodness that Rocky arrived at Blue Cross in time for vets to save his life.

The advertising of puppies online, before completing the sale at a public location, is an increasingly worrying trend, and more and more dangerously ill pets who have been bought in this way are being treated by Blue Cross vets. Despite the charity’s expert care, some of them have been too sick to save.

In total, the charity’s veterinary services – across four animal hospitals and numerous clinics – helped care for more than 28,000 pets in need last year. Rocky is also one of nearly 9,000 dogs, cats, horses and small pets who were found the happy homes that they deserved.

Another of them was mischievous new kitten Eddie. He too arrived at Blue Cross’s flagship Victoria hospital as an emergency case, after falling from a three-storey window. 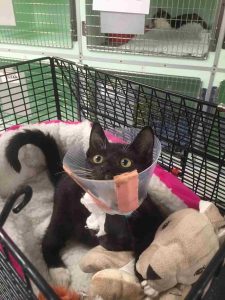 He had never been outside before, and wanted to explore before he was ready.

The team of vets and nurses were relieved to find he had escaped the huge fall without any internal injuries, but were concerned to see him struggle to put weight on his right leg.

X-rays revealed that he had a broken elbow which, if left to heal on its own it, would have caused Eddie a lifetime of suffering.

The only option was to amputate his leg, but the resilient chap was up and about in no time – the only challenge was trying to keep him still so he could rest.

He soon went into the care of Blue Cross’s rehoming services and was found a happy home with Emma Taberner and Jack Perkin in Oxfordshire.

The couple, who both grew up with cats, say they wouldn’t be without the cheeky boy now.

Emma added: “He’s either charging around playing or passed out on your lap; it’s polar opposites with him.” Jack added: “He’s a real character.”

Blue Cross receives no government funding for its work to save and care for pets in need like Rocky and Eddie, and find them loving homes. It relies solely on donations from kind animal-lovers and dedicated fundraisers.

If you would like to donate to Blue Cross, or consider leaving the charity a gift in your Will, find out more at www.bluecross.org.uk.

Rabbit vaccinations – which do you need and why?

Your Guide To Regular Dog Grooming

Why you should donate to Blue Cross

Purely Pets Insurance – The Best Support for your Pet