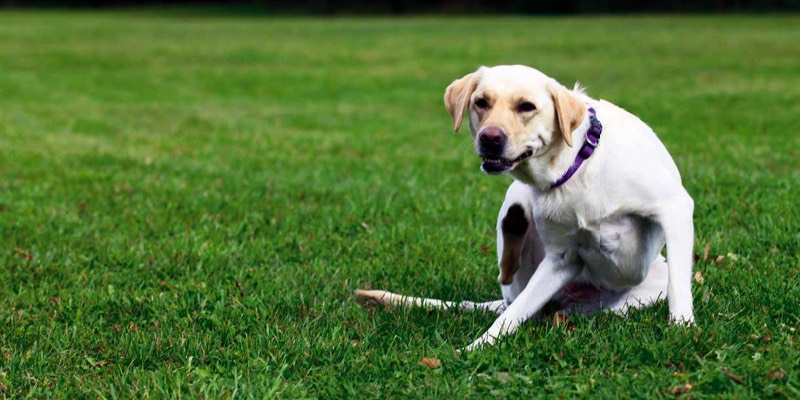 Hopefully, the only times you will need to see your vet will be for your dog’s vaccines and getting parasite prevention treatments. But what are they for (or rather, against) and why should you get them for your dog?

Distemper: Distemper is caused by a virus that affects the cells of the immune system and the nerve cells, hence its potential for great harm. The most affected group are dogs under 1 year of age. While most dogs (50-70%) do not develop severe signs and recover, sadly there are also dogs for which, if unvaccinated, the disease proves fatal.

Hepatitis: This virus affects the eye tissues causing the surface of the eye to turn milky white, but also vital organs like the liver and the kidneys. Just as with the distemper virus, the majority of infections are mild, and dogs show few symptoms. But there is a certain percentage of dogs that, unvaccinated, develop the acute form, leaving them with life-long side effects or causing their death.

Parvovirosis: Parvovirus is every dog breeder’s and vet’s nightmare. It affects very young puppies, under 12 weeks of age, when they do not have many reserves to withstand its impact. The virus mainly attacks the lining of the gut and the cells of the immune system, often causing fatal dehydration or exposing the puppies to serious secondary bacterial infections. The treatment is very intensive, expensive, and often unsuccessful. In cases of increased risk, puppies can be vaccinated against it at 6 weeks old. The vaccines against these diseases are usually combined in one bottle, though they can be given separately as well. The first dose is given at 2-3 months old, then 1 year later, then repeated every 3 years.

Leptospirosis: This is caused by a bacterium, Leptospira interrogans, that survives very well in moist environments and stagnant water. It infects a lot of rodents, which then carry it around and spread it with their urine. It also attacks the vital organs like the liver and the kidneys, often being fatal in its severe form. But the worst thing about it is that it is a zoonosis, meaning people can also catch it from dogs. The L2/L4 vaccine is given to young puppies, around 2-3 months old, in 2 doses, 2-4 weeks apart, then repeated every year because the immunity rarely lasts longer than 12-13 months. There are many subtypes of Leptospira that can cause disease. The L2 vaccine provides protection against 2 of them and the L4 version against four of them, therefore the latter is preferred.

Kennel cough: Kennel cough is caused by various virus-plus-bacterium combinations, but the most common one, included in the vaccine, is the canine parainfluenza virus and a bacterium called Bordetella bronchiseptica. The disease affects the lining of the upper respiratory system, from nose to trachea and in most cases causes moderate to severe throat irritation and a dry, honking cough for 5-10 days. Unchecked infections (in very young puppies or older, sick animals) can progress to the lungs causing pneumonia and severe illness. Bordetella can infect humans as well, especially the immunocompromised ones. The vaccine contains fragments of viral particles and live, but inactivated bacteria. It is often given to puppies together with the other primary vaccines and repeated yearly. There are 2 types of vaccine, depending on their way of administration, one that is put in the dog’s nose and another that goes in their mouth.

External parasites (living on the dog)

Fleas: Fleas are the most common skin parasite of dogs. Adult fleas have a dark brown, narrow body 4-5 mm long, and are very nimble. Because they feed with blood, they spend most of their time on the animal itself. Flea eggs and larvae are not visible with the naked eye, and their vast majority (up to 95%) are found in the environment rather than on the dog. The main problem with fleas is that they cause severe itchiness, skin irritation and infections. In young puppies they can also cause anaemia. For allergic or atopic dogs, flea saliva and their bites are an important trigger for allergic flare-ups. Fleas can carry several blood diseases affecting dogs and humans. Since they are so common, easy to contract anywhere and difficult to get rid of, continuous flea treatment is strongly recommended for all dogs. 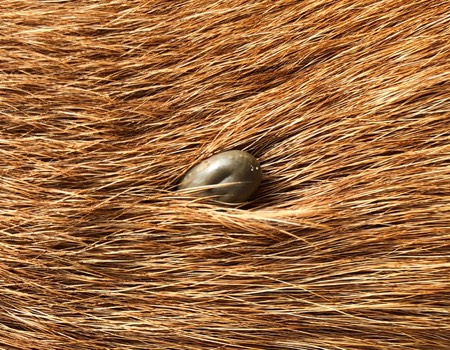 Ticks: Ticks are the other type of blood-sucking parasite commonly seen in UK dogs. Unlike fleas, they are flattened top-to-bottom, rather than side-to-side. After filling up with blood though, they become rounded. Their size varies from 3-4 mm to over 1 cm. They have different colours depending on their species, from a very light cream to dark grey or brown. The main problem with ticks is not so much the amount of blood they drink (though in big numbers they can also cause anaemia), but that they can carry diseases in their salivary glands and transmit them to dogs or even people (Lyme disease, babesiosis, ehrlichiosis). Removing them ASAP reduces the risk of disease transmission, so check your dog after walks in wild areas. How necessary tick prevention is for your dog depends on where you live and what is your own and your dog’s lifestyle.

Mites: Mites are tiny things that live either on the very surface (like Cheyletiella or Otodectes) or in the top layer of your dog’s skin (like Demodex or Sarcoptes), feeding on dead skin rather than blood. They are too small to be seen with the naked eye. But they are recognisable by the intense itchiness they cause and their presence’s secondary effects on the dog’s skin – rashes and pimples, thickening of the skin, dandruff, etc. Healthy adult dogs usually build immunity and keep their numbers rather low, but they can cause a lot of pain and discomfort to young puppies and especially to allergic and atopic dogs. Some topical products against fleas work against mites as well.

Lice: Dog lice are very similar to human lice, they are lightcoloured, flat parasites approx. 2-3 mm long, usually found in clusters at hair roots. Very occasionally seen in puppies. They can cause itchiness, but not too serious a damage since they feed on shed dead skin flakes. The products that combat fleas and mites usually also prevent lice.

Internal parasites (living inside the dog)

Roundworms: Roundworms are called so because they are circular on crosssection. There are several types of roundworms that can live inside a dog. Some roundworms like Toxocara canis, Toxascaris leonina, Trichuris vulpis and Uncinaria stenocephala live in a dog’s intestines. They cause diarrhoea, with or without blood in it. The last two species are called hookworms because their mouthparts have sharp hooks with which they attach to gut lining, damaging it and feeding on the blood.

Dogs continuously pick up roundworm eggs or larvae from outside and large numbers of worms can cause serious problems by obstructing the gut or causing severe digestive upsets and bleedings. 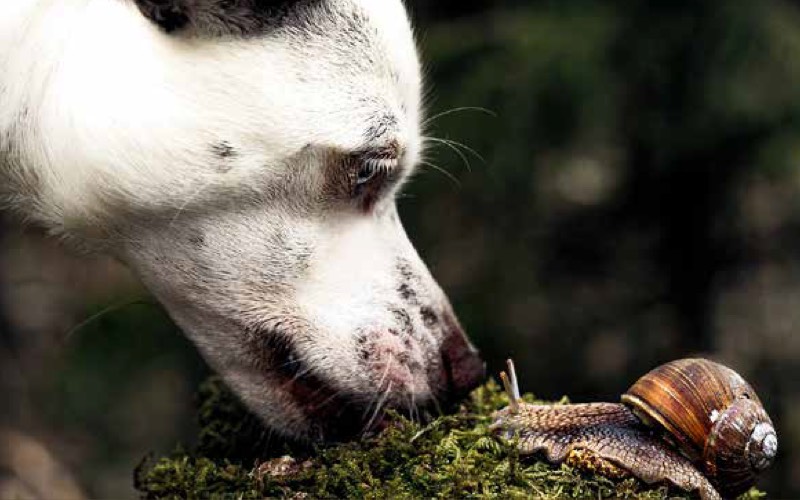 They can also infect humans, especially children because of their closer contact with dogs and inconsistent handwashing. Regular deworming is recommended for all dogs, though its frequency can be determined together with your vet depending on where you live and how much your dog scavenges. Other important roundworms are the ones living in the cardio-respiratory system. The heart worm Dirofilaria immitis is not found in UK yet, but the lungworm Angiostrongylus vasorum is becoming more and more frequent here. Just as the name indicates, it matures and lives inside the lung blood vessels and airways. It causes severe coughing, pulmonary hypertension and bleedings and infestations are quite commonly fatal.

Lungworm larvae often develop in intermediate hosts like slugs or snails and puppies get infected by playing with the former, though the parasite can be picked directly from the environment too. If the risk of lungworm is high, deworming is recommended monthly. Lungworms are similar enough to the intestinal roundworms to be sensitive to the same dewormers.

Tapeworms: Tapeworms get their name from their ribbon-like shape. The most important ones for dogs are Dipylidium caninum, Taenia spp. and Echinococcus spp. Dipylidium is carried by fleas and dogs that get fleas occasionally get infested with them as well. Dogs can pick Taenia spp. worms by eating small animals that act as intermediate hosts. Tapeworms also inhabit the dog’s gut where the adult worm attaches to the wall and sheds egg-laden body segments called proglottids with the faeces. These can easily survive in the environment and infect other dogs or be transmitted to people. They cause dogs itchiness around the anal region that makes them scoot. Young puppies infected with tapeworms grow poorly and get that typical distended worm-belly. Not all dewormers effective against roundworms clear out tapeworms, sometimes a combination of dewormers is necessary. Adult dogs do not develop immunity to tapeworms.

Echinococcus multilocularis, the fox tapeworm by its common name, is a special case when it comes to tapeworms. The parasite is not normally present in UK, but it is common in continental Europe. Dogs travelling abroad with their owners can easily become infected with it. The disease is not a very serious one for dogs, the risk of it is greatest for the owners. Because the fox tapeworm is not well adapted to surviving in a human body, if eggs or larvae are ingested by a human, they cannot develop and migrate as they would do in a fox or a dog and instead create cysts with immature larvae mostly in the liver, occasionally in muscles or even the brain.

Human echinococcosis is a very serious disease, often fatal if not diagnosed and treated on time, hence the requirements to treat all dogs against it prior to (re)entry to UK.

The Kennel club – How to responsibly buy a puppy