Almost ten years ago, my dog saved my life. It was an afternoon in August and I had pulled over the car to give my dogs a run around in the fresh air after work. Two of them jumped out and sped off into the fields. My fox-red Labrador Daisy didn’t move. She stood in the boot of the car with her big brown eyes fixed on me and then started pawing and nudging my chest. Surprised by her odd behaviour, I felt the place where she had been prodding. It felt bruised and I thought I could feel a small lump…

Encouraged by my sister, a medic, to go and get it seen to, I did and was referred to a consultant. The consultant found a deep seated tumour in its early stages. He told me that by the time a lump had become noticeable, this cancer would already have spread and my prognosis could have been very different. As it was, thanks to Daisy, the lumpectomy and six weeks of radiotherapy was able to destroy the cancer completely. I feel sure I owe Daisy my life. Daisy’s warning was particularly serendipitous as I happened to be training her and other dogs to be a medical detection dog.

A number of anecdotal stories I’d heard about dogs detecting their owners’ cancer had led me to make contact with others who had begun to ask themselves the same questions: could dogs detect human disease and if so, how could that ability be harnessed to save lives?

The small team that formed included Dr John Church, a former orthopaedic surgeon and a pioneer of the use of maggots in the treatment of wounds, and Dr Carolyn Willis, a senior dermatology researcher from Buckingham Healthcare NHS Trust. Together we narrowed down the options for the samples we could collect that would contain the cancer volatiles that omit the odour we believed the dogs could detect. We decided on urine as a sample relatively easy to collect both from healthy people and those with cancer. Obtaining samples did of course involve much form-filling to complete the necessary medical protocols. 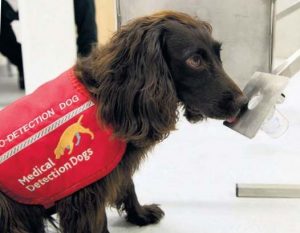 The next challenge was to figure out how to train a dog to detect an odour we couldn’t detect ourselves. When you teach a dog to smell drugs or explosives, you show the dog the odour you want him to find and them reward him when he does. We would have to work backwards. We would present a dog with samples containing hundreds of ingredients and reward him when he identified the sample with one specific ingredient that would (we hoped!) be present in a cancer sample.

In April 2002 we began training for our first trial. We had samples donated by patients with bladder cancer, some of them terminally ill, but all prepared to help a research project that could one day help to save lives. The control samples came from any young person prepared to donate them, some of which had other urological diseases. It had to be young because we did not want to risk one of our controls unknowingly having cancer. Bladder cancer is vanishingly rare among young people. 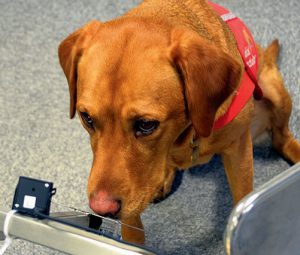 Training went well with the dogs learning to correctly identify the cancer sample in a line of controls. There was one control sample however from a patient cleared of having bladder cancer, that one of the dogs, Tangle, persisted in alerting to. Puzzled by Tangle’s behaviour, a consultant urologist called the patient back for further tests. Only then was it discovered the patient had a tumour on his kidney. Fortunately, the tumour had been caught at an early stage and it was successfully removed. A few weeks later a letter arrived from the patient: “Dear Tangle, thank you for saving my life…” Of course, we don’t know for sure that Tangle saved his life, but had the tumour been found at a later stage, his prognosis might have been very different.

The episode gave me the confidence to pursue my theory that the dogs could be used to find cancer that other tests had missed, to find it quicker than existing tests and less intrusively. It was also an indication that urine could be used to detect other types of cancer beyond bladder cancer.

In 2003, we ran the big trial according to all the medical protocols. If the dogs were detecting purely by chance, the reliability rate would be only 14 per cent. The result when it arrived was 41 per cent reliability, almost three times the rate of chance. The best dog, Tangle achieved 56 per cent reliability. Our study was published by the British Medical Journal a year later. As the BMJ said, we were working in a completely new field with no guidance to follow and “no relevant peer-reviewed publications to refer to.”

Two years after the first trial, we began the process of setting up the organisation that was to become Medical Detection Dogs and applying for charitable status, which we finally achieved in 2008. By 2011, we had completed a second trial that was published in Cancer Biomarkers, a journal that publishes original research on the subject of identification of markers associated with cancer. The results were much better. The best cancer detection dog, Daisy, who had detected my breast cancer two years before, was correctly identifying 73 per cent of cancers.

Also in 2008, we trained our first medical alert assistance dog. It happened more or less by chance. The wife of a mathematics professor contacted me because her husband, Cherry, was a type 1 diabetic who had lost all warning symptoms when he was about to suffer a hypoglycaemic attack. She had heard about pioneering studies in Australia into the use of dogs to alert diabetics to blood sugar imbalances and was wondering if I would be able to train their dog to perform a similar task for her husband.

I had never trained a dog to do anything similar, but I felt confident it could be done given the close, symbiotic relationship between dogs and humans and the power of dogs’ sense of smell.

I went to stay with the couple and taught them to reward their Labrador, Zeta, each time she showed an interest in Cherry when he was testing his blood sugar levels. When she took an interest when the sugar levels were low, the couple clicked a clicker and gave her a treat. Zeta caught on very quickly and soon began alerting constantly and reliably, even in an outdoor environment with plenty of competing smells.

It was clear this was a way of training dogs to save lives that could make a difference straight away. The cancer work was still at the research stages, but Zeta had proved the diabetes work was ready for practical use. The science behind the work was very much the same as the science underpinning the cancer research: metabolic changes in the body give off an odour which the medical detection dogs, detect. With diabetes, the signal of altered sugar levels in the blood is, I believe, exhaled in the breath.

After that, requests for medical detection assistance dogs came in thick and fast. We built up the team of staff and volunteers to fundraise, train, socialise and take care of the dogs while they weren’t ‘at work.’ We’ve always had a no kennels policy.

Almost ten years on from its foundation, the charity is thriving. We have now placed over 100 assistance dogs, mainly with individuals with type 1 diabetes, but also Addison’s, PoTS and severe nut allergies too.

The bio detection arm of the charity has gone from strength to strength. We are currently completing a major trial into the detection of prostate, kidney and bladder cancer in conjunction with Milton Keynes University Hospital, a great local partner for our work. In addition, our dogs have been approached to take part in a medical trial into the detection of Parkinson’s and malaria using odour with the University of Manchester and University of Durham respectively.

Teams of scientists across the world are interested in reproducing our research and I am regularly flown to address conferences in Canada, Poland and Hawaii to discuss how best to hone our techniques for the most accurate results possible.

We’ve been lucky enough to be granted the patronage of HRH the Duchess of Cornwall, who has done wonders to raise awareness of our works. Our team of ambassadors include Kate Humble, Deborah Meaden, Anne Robinson, Jo Malone and Lesley Nicol. Every one has made an immeasurable difference to the charity.

Our alert assistance dogs are saving lives already every day and I am more confident than ever that our bio detection dogs have the potential to save many thousands more lives in years to come.

All we need is the generosity of the public, who make every day’s work possible, and the good will of our dogs. Fortunately, as their constantly wagging tails attest, the dogs’ willingness to help us catch disease is unwavering.

Find out more at www.medicaldetectiondogs.org.uk

Animal Friends Insurance’s top tips for travelling with your pet