WIN a DC League of Super-Pets Holiday in the UK from BURNS Pet Nutrition NOW! 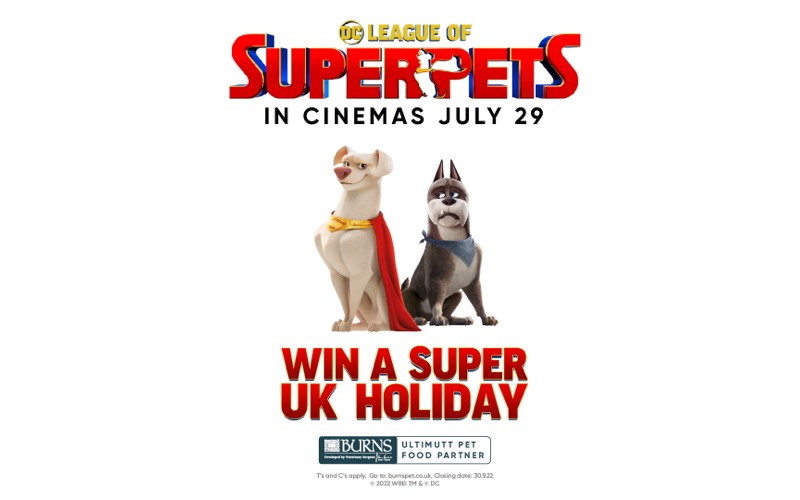 Burns Pet Nutrition partners with Warner Bros. for the first-ever DC League of Super-Pets animated action adventure, only in cinemas.

Burns Pet Nutrition is thrilled to announce its first partnership with Warner Bros. to support the release of the highly anticipated big-screen movie DC League of Super-Pets, which opens nationwide in cinemas on 29th July 2022.

DC League of Super-Pets promises to be the big family release over the summer holiday season. The on-pack promotional campaign with Burns Pet Nutrition will run in-stores from early July through to September 2022. The promotion will backed by a national marketing campaign including in-store POS, ATL national newspaper ads, social media spend, digital marketing and social media influencer activations.

The promotion offers customers the chance to win a UK Holiday alongside runner-up DC League Super-Pets goody-bag prizes. The winning package will include a two-night stay at a luxury cottage in a location of the winner’s choice for four people, including £300 for spending money and travel.
Of the new partnership with Warner Bros., Burns founder John Burns commented:

“As our brand continues to grow and expand, we’re thrilled to be supporting the release of this movie and partnering with Warner Bros. in what we hope will be the start of a fruitful relationship.”

About Burns Pet Nutrition
Burns Pet Nutrition is a family run business based in Kidwelly, South Wales. The natural pet food company has been feeding healthy and happy cats and dogs since 1993 and is helmed by Veterinary Surgeon and business owner, John Burns.

All Burns products are natural, hypoallergenic and designed to suit all dog breeds and ages. Mr Burns is an advocate of healthy eating and believes that many of the health problems affecting pets are diet related and can be avoided with the correct nutrition.

About DC League of Super-Pets
In DC League of Super-Pets, Krypto the Super-Dog and Superman are inseparable best friends, sharing the same superpowers and fighting crime in Metropolis side by side. When Superman and the rest of the Justice League are kidnapped, Krypto must convince a rag-tag shelter pack—Ace the hound, PB the potbellied pig, Merton the turtle and Chip the squirrel—to master their own newfound powers and help him rescue the Super Heroes.

Keep up to date with the latest pet news by sharing your details with us.

Rabbit vaccinations – which do you need and why?